This chapter utilises local historical information generously provided by courtesy of the Town of Ajax Archive, Ontario, Canada  supplemented from local and other historical archives.

The naming of the Canadian Town of Ajax in Ontario is unique being the only recorded instance of a town or city taking its name from a ship. It continues to be the only town or city in the world so named.

But why name a town after a ship, especially a Canadian town with that of a British warship?

How did this happen?

And why this particular ship?

On September 10, 1939 when Canada declared war on Germany, the present site of the Town of Ajax was then just peaceful rolling farmland nestled on the edge of Lake Ontario in Pickering County, some 16 miles (25 Kms) east of Toronto. In fact at that time it had only been 150 years since the first white settlers had arrived in this area to start their new life in what to them was unknown land.

And so it had remained peaceful farmland until abruptly early in 1941 it suddenly became the site of Defence Industries Limited (D.I.L.), Pickering Munitions Works. Thus began what was to rapidly become a vast munitions plant, the largest in Canada and one of the biggest in the world. By 1945 the Works had filled 40 million shells; employed over 9,000 people at peak production, by far the majority being female. It boasted of its own post office, water and sewage treatment plants, a school population of over 600, 30 miles of railroad and 30 miles of roads. The entire D.I.L. plant site included some 2,985 acres. People had come from all over Canada to work at D.I.L.

This enormous burgeoning war plant had grown very quickly into a community which sorely needed to have its own identity, its own name. In mid summer of 1941 the D.I.L. management formed a committee to arrange a competition to choose a name. The name chosen was to come from the first significant British naval victory of World War 2 and of course, the D.I.L. Pickering plant was a critical supplier of shells to the British Royal Navy.

Off the coast of South America between 13th to 19th December 1939 a flotilla of British warships, HMS Ajax, HMS Exeter and HMS Achilles (Royal Navy New Zealand Division), commanded by Commodore Henry H. Harwood, had engaged and routed the powerful German pocket battleship Admiral Graf Spee at the Battle of the River Plate, near the Uruguayan port of Montevideo. A feat of arms which Winston Churchill, then First Lord of the Admiralty, described in a memorable speech presented at a Luncheon in celebration of the Battle at London’s Guildhall in February 1940 to the attendant crews of HMS Ajax and HMS Exeter (HMS Achilles had returned to New Zealand for her own celebration) ‘the brilliant sea fight.....takes its place
in our naval annals .....in the days of a dark cold winter it warms the cockles of the British heart’. That speech literally reverberated around the world. This Battle thus became one of the Royal Navy’s most well known World War 2 naval battles and in 1956 was made into a very successful film ‘The Battle of the River Plate’ starring John Gregson, Peter Finch and Anthony Quale. The name Ajax and the names of her accompanying ships became worldwide symbols of courage and determination; attributes this Canadian community obviously respected and found synonymous with their name seeking aspirations. So Ajax was chosen as the name of this war-born community.

Although the reverse has been common practice for the Royal Navy to name its ships after towns and cities, this naming was unique forging a link not only to the Royal Navy but to those officers and crews who served in this, the seventh Royal Naval vessel to bear the name, HMS Ajax, a cruiser built in 1934 and it’s successor, a frigate built in 1962, through which a tradition has now been established. The Town takes a particular interest in maintaining very strong links with the HMS Ajax and River Plate Veterans Association (Note 1) with regular mutual visits particularly as anniversaries occur. Since 1962 each incoming Mayor automatically extends an invitation to the British Admiralty for their ships to visit the town, particularly if an HMS Ajax is currently in commission. Both the cruiser and frigate did pay visits. Upon the frigate being decommissioned and scrapped her anchor was donated to the Town and is now proudly installed there. Special commemorations are to take place in the Town in June 2014 to celebrate the 75th anniversary of the Battle in which a contingent of members of The HMS Ajax & River Plate Veterans Association will participate.

But what was to become of this Town named Ajax? Many people who worked or lived in Ajax during the D.I.L. or university days wanted to remain there. Due largely to the vision of George W. Finley of the Central Mortgage and Housing Corporation, Ajax became a planned modern community using the war time base for its post-war foundation. The swords were beaten into ploughshares. Post-war Ajax began its growth.

Industry and people came from everywhere to take advantage of the many assets of Ajax. Its schools, churches, hospital, steam generating plant, comprehensive town planning and particularly its geography on the shore of Lake Ontario close to Toronto but setting its individual identity, at a separate pace with its friendly, industrious and involved citizens.

Brenda Kriz, Records Manager and Freedom of Information Coordinator for the Town of Ajax, who devoted intensive research to the subject, concluded the name Ajax was adopted by the management of the Defence Industries plant in the late summer to early autumn of 1941 following the competition to name the community which had been held in mid-summer. The community gained its own municipal government in 1950 as the Corporation of the Improvement District of Ajax. 1953 saw it become the Corporation of the Town of Ajax holding its first council elections that December. In 1973 it was amalgamated with the Village of Pickering while annexing certain portions of the Township of Pickering and became The Town of Ajax. This was all part of the new Durham Region. The Durham Region and the Town of Ajax officially came into being on January 1st 1974. In 2011 Ajax had a population of 109,600.

There is one final and unique chapter of this bond connecting Town and Ship. The Town is a living memorial as it accords the honour of naming and dedicating all of its streets by taking the names of the Officers and Crew of this Cruiser Ajax, the Frigate which followed her of the same name and of the other two warships at the Battle of the River Plate, HMS Achilles and HMS Exeter. To date some 600 streets have been so named. Thus Bob Sharplin is now remembered by “Sharplin Drive” completed in 2012 and dedicated along with several others on 16th June 2014 in the presence of this author, Bob's son, during the Town's celebrations to mark the 75th Anniversary of the Battle of the River Plate. 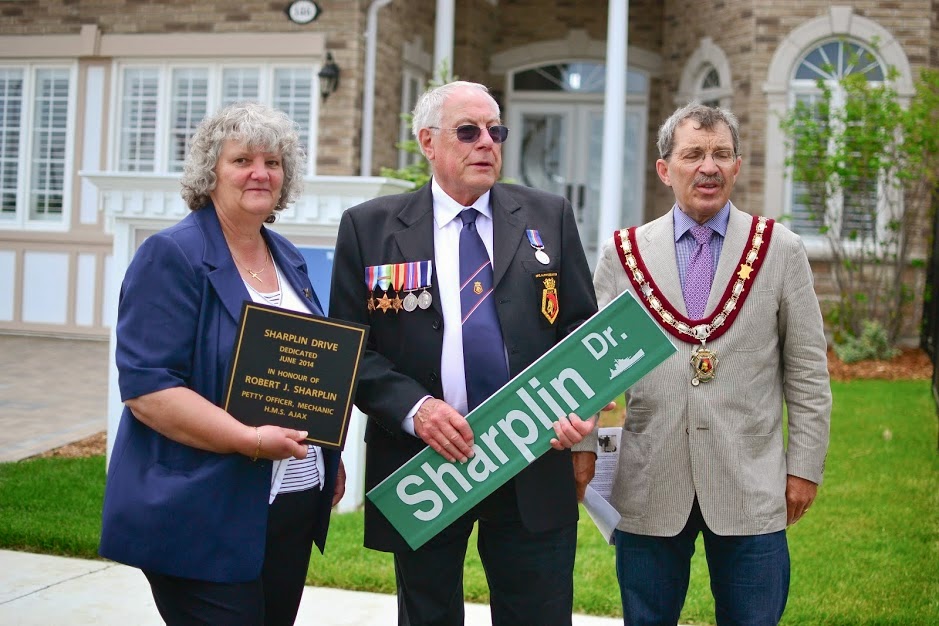 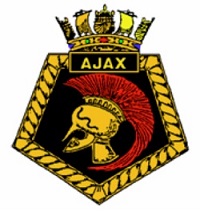